Close to the nexus of some fertile football breeding grounds — nearly equidistant to NFL prospect factories Clemson, UNC, Tennessee and South Carolina — lies a small liberal-arts Lutheran school that once was just another exit off the highway for itinerant pro scouts.

For years, it was a drive-by when it came to mining talent.

Division II’s Lenoir-Rhyne hadn’t produced an NFL player of note in nearly two decades prior to the 2020 NFL draft, so Hickory, North Carolina wasn’t a place many talent evaluators deemed necessary of spending extra time. That’s changed over the past few years.

First came Kyle Dugger, Lenoir-Rhyne’s athletically gifted late bloomer who vaulted to the 37th overall pick of the New England Patriots in 2020. Scouts flocked to Hickory to scout Dugger, likely the first time many had visited the school.

Dugger was no Halley’s Comet. There’s another Lenoir-Rhyne prospect scouts are circling back en masse to watch — wide receiver Dareke Young, another freakish talent who is very much in the 2022 draft picture.

After only nine catches combined in his first two seasons, Young broke out in 2019, leading the team in receptions (25), receiving yards (515), receiving TDs (eight) and yards per catch (20.6).

He also was a productive runner in the Bears’ former ground-heavy, Wing-T, rushing 49 times for 335 yards and four scores. In that system, Young also was asked to occasionally block defensive ends.

“I take pride in that,” Young told Yahoo Sports. “I think it helped me establish my physicality.”

Young’s path was slowed in 2020 by the COVID-19 pandemic, a knee injury, a significant shift in offensive philosophy and a slow start to the 2021 fall season. Much of those struggles was forgotten last week when the 6-foot-2, 214-pound Young gave the banner performance many scouts were waiting for.

In a 31-16 victory over Mars Hill, Young caught eight passes for 160 yards and three touchdowns, flourishing in the more wide-open passing attack. He should have had a fourth TD on the opening drive but interfered with just outside the end zone. Young had another shot at a score, leaping over three defenders to grab a Hail Mary at the end of the first half, only for referees to rule that his toe touched out of bounds.

No matter. It backed up why there has been so much return traffic for the school’s latest gem.

“Coming off a loss, I knew as a leader and captain I needed to set the tone by dominating whoever lined up across me until the clock hit zero,” Young said. “Three touchdowns — should have been four or five, honestly. But we got the win, and I’ll do whatever’s necessary for that. I hate losing.”

The NFL is flocking to Lenoir-Rhyne again

Just this week, more NFL teams descended on Hickory, including an NFC director of scouting and an AFC personnel director. Teams don’t typically ship that level of scouting staff to a Division II school unless a player is receiving fairly robust grades.

“It’s been wild,” said Tanner Hardy, Lenoir-Rhyne’s director of player personnel and NFL liaison. “[Young] clicked and hit another level back in March. He gets it now. He’s seeing how good he can be, and so are scouts.”

In March, Young was rehabbing from a partial tear in his PCL he’d suffered last fall in practice. The injury didn’t require surgery, but the 12-week rehab plan — put together by two Alabama football doctors, James Andrews and Lyle Cain — had Young feeling better faster than expected.

Young pleaded with the coaches to let him play during the spring season, which was uncertain. They eventually gave in, and Young responded with 14 catches for 218 yards and two TDs in two games, including 166 yards vs. Tusculum.

Before that, they had to convince him to stick around. Young considered entering the 2021 draft but opted against it, considering his knee injury, a deep receiver class and the risk of not having played in 2020 after COVID canceled the fall season.

Then bigger schools started sniffing around Young, having heard the buzz. Would he be interested in transferring to an FBS program to help boost his stock?

Young turned them all down, seeking to finish what he started in Hickory, which included the undergraduate degree he completed in engineering physics. He’s now going for his MBA while also prepping for a possible NFL career.

“I didn’t want to walk away from my teammates and not be a part of [the program],” Young said. “I also didn’t think I was yet the best version of myself. I had more to prove, more to improve on. That’s why I am here.”

Even with Dugger proof that the NFL will find talent anywhere, Young knew it was a risk to stay at Lenoir-Rhyne. Only 10 DII players have been drafted since 2019, including only five the past two years combined.

“A lot of that athletic ability is just God-given,” Hardy said. “I can’t even imagine what he’ll look like after a year or two in an NFL training program.”

Those players were all top-40 selections, as was Dugger. Could Young reach that same rare air?

Right now, it feels like a reach. But with Young heating up, he’s very much on the Senior Bowl map. A strong week there, as it did for Dugger, could do wonders for Young’s stock, as well as the big workout he expects to turn in at the NFL scouting combine.

“There’s time to think about that later,” Young said. “Right now, I have plenty I need to work on here.”

Getting drafted would be huge for Young and the school to whom he has remained loyal. Being taken on Day 2 (Rounds 2-3) of the draft would be a stunning development for any DII prospect and program.

“I’m hoping all 32 teams just start making Hickory a permanent stop on the scouting map. We operate at a DI level around here and our goal is to establish Lenoir-Rhyne as the premier small-school pipeline to the NFL,” Hardy said.

After Dugger and Young, the excuses are running out.

Lightning caused a two-hour delay of a recent Bears practice. Hardy figured the three NFL scouts in attendance that day would use the poor weather as an excuse to pack up and make the 45-mile drive to Appalachian State. After all, scouts don’t have a lot of sitting-around time, what with driving from school to school and often burning the midnight oil to write reports.

“No, we want to watch the kid play,” one scout said.

The other two stuck around, too. Young is giving them good reason to visit more often.

Onstage, ‘Designing Women’ Sheds the Shoulder Pads, Not Its Politics

Fri Oct 1 , 2021
The show wasn’t entirely progressive. Its sole character of color, Anthony Bouvier (Meshach Taylor), had a subordinate role in the firm, and queer characters were rare. But it gave its characters divergent attitudes, insisting that the experience of women wasn’t uniform. In a logline, the characters might have come across […] 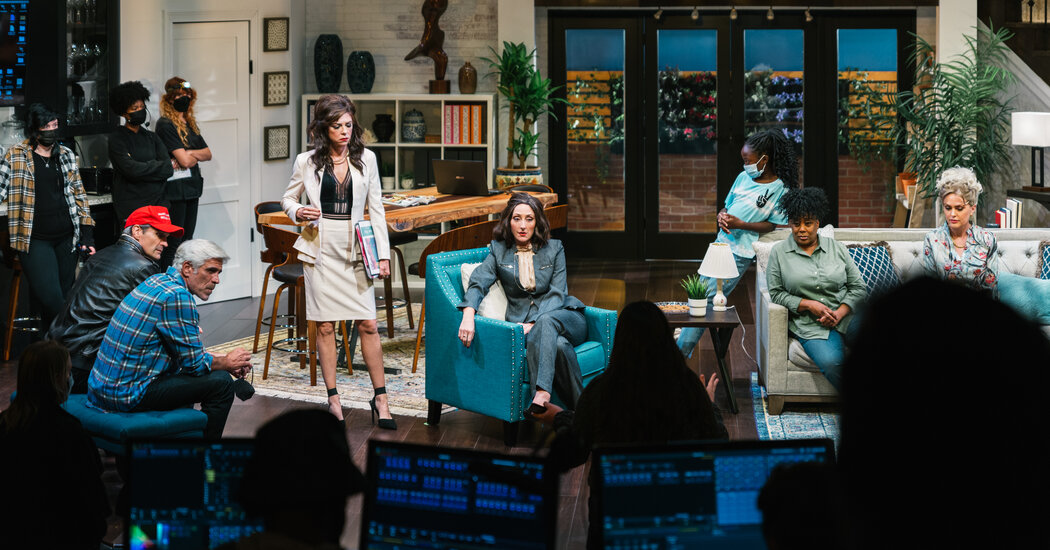