Right-wing conspiracy theorists and a Republican lawmaker are spreading a baseless rumor that the Uvalde elementary-school shooter was transgender.

Salvador Ramos, 18, killed at least 19 children and two adults at Robb Elementary School in Uvalde on May 24. That same evening, Rep. Paul Gosar (R-AZ) joined in the disinformation campaign on social media.

“It’s a transsexual leftist illegal alien named Salvatore Ramos,” Gosar posted in a since-deleted Tweet. Prior to Gosar’s post, Ramos had reportedly been identified as a male born in North Dakota. 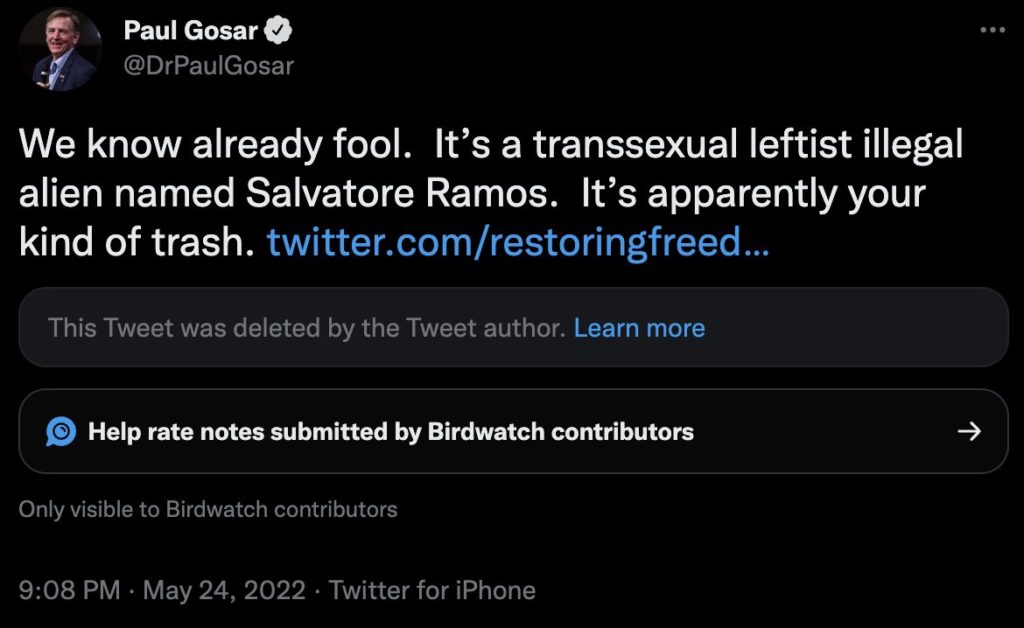 Political commentator Candace Owens tweeted, “What drives an 18-year-old to murder innocent children? I don’t know. But judging by the photos of him cross-dressing, we can assume there were plenty of signs that he was mentally disturbed and abused by adults in his life.” 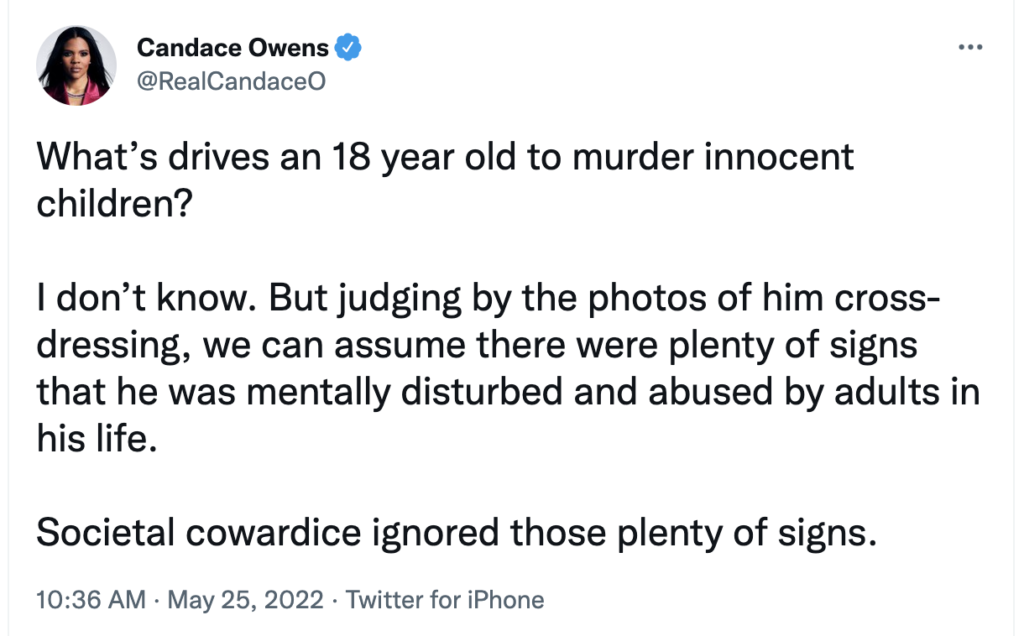 The allegation about Ramos’ gender identity stems from alt-right conspiracists posting photos of random trans women and then claiming that the shooter was trans. According to the Condé Nast website Them, users on a Discord server related to the 4Chan message board /pol/ (a widely known platform for discussing violent extremism) discussed planning to intentionally trick people into believing that the Uvalde shooter was trans.

Alex Jones alleged on his May 24 episode of InfoWars that Ramos might be trans. He also shared photos of unidentifiable people wearing skirts, who he believed could be Ramos.

“When this happened, when I got up here and started covering, I said ‘I bet it’s an incel, I bet it’s a dude in a dress. Like when Dave Chapelle said ‘I just got attacked by a [trans person], and it was,” Jones said. “I’m not trying to be mean to some people who are like that, but statistically, these people have a higher percentage of wacked-out folks.”

A viewer then called into Jones’ show sharing that the conspiracy-theory site Natural News posted an article called “Mentally ill Texas school shooter found in photo as a cross-dresser (trans).”

Jones told the caller he had a photo of Ramos wearing a skirt. Later in the episode, he shared a tweet from Andy Ngo that asked people to stop claiming that the images of people in skirts being circulated are Ramos, because none of those images had been confirmed to be the shooter. Jones’ co-host Owen Shroyer said “I just want to be clear, the images that they’ve been talking about are not the ones that we’ve been sharing. We’ve been sharing the images that are on the Instagram account that is claimed to be his.”

One woman, whose photos were stolen from Reddit and used to spread the theory that Ramos was trans, posted an update on her page that stated, “It’s not me, I don’t even live in Texas. People are using [my photos] to make trans people look like murderers and blaming me for the shooting.” According to the website Them, another Twitter user who was blamed for the shooting wrote that she could not take legal action against those claims because she was not out to her father. 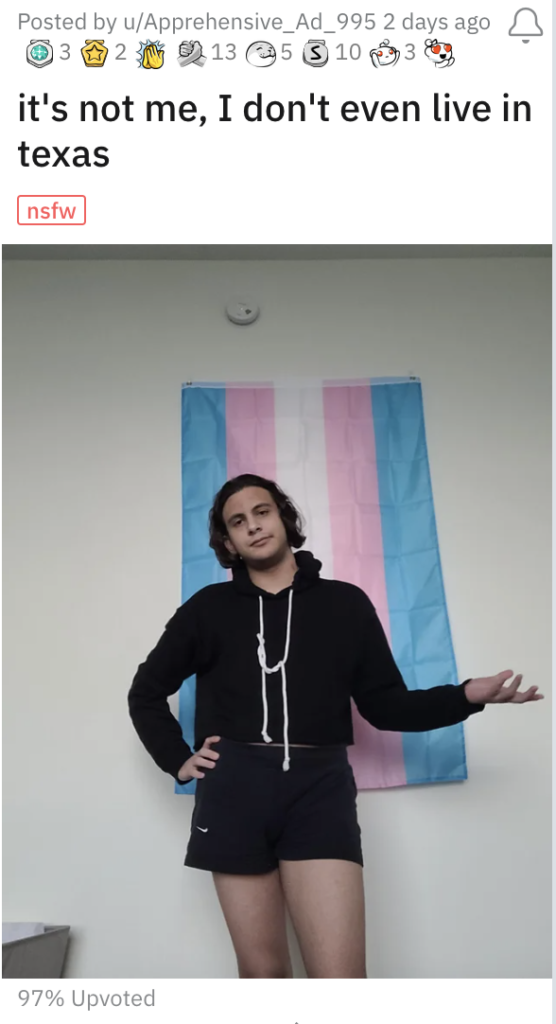 This is not the first time alt-right conspiracy theorists have falsely accused LGBTQ people of committing violent crimes. In 2018, shortly after the Parkland, Florida high school shooting, Jones posted a picture on his website of Marcel Fontaine, a 25-year-old gay autistic man from Massachusetts, and wongfully claimed he was the shooter. Jones said he received the photo of Fontaine from 4Chan.

Fontaine sued Jones, InfoWars, and an InfoWars reporter in Texas that same year. The complaint said InfoWars posted his photograph on its website the day of the shooting in Parkland, Florida, depicting him as the gunman at Marjory Stoneman Douglas High School, where 17 people died. Nikolas Cruz, the actual gunman, pleaded guilty last October.

The lawsuit stated Fontaine had never been to Florida, yet suffered “harassment and peril even from individuals aware of his identity as a Massachusetts resident but who nevertheless remain convinced he was part of a horrifying conspiracy.” Fontaine sought unspecified damages, and the case is still pending.

Sadly, Fontaine died in a fire in Massachusetts on May 15, according to one of his lawyers. The case will continue on behalf of Fontaine’s estate, attorney Mark Bankston told NBC Boston. Lawyers for InfoWars have countered in court documents that Fontaine has failed to show any evidence of malice or injury resulting from his photo’s publication.

Far-Right Conspiracists Claim the Uvalde Shooter Was a Trans Woman

Fri Jun 3 , 2022
General Motors subsidiary GM Defense LLC is looking to do business with Canada. In a statement Tuesday, GM Defense said it will start expanding, with the intent to deliver highly customized vehicles and other services to international military, security and government customers, with Canada being one of them.  “GM’s world-class manufacturing and engineering resources in […]