We’ve covered everything related to TCU athletics. Our articles have featured most of TCU’s teams – football, basketball, baseball, soccer, rifle, swimming and diving, track and field, tennis, golf, equestrian, and volleyball. We’ve covered recruiting, our own coaching changes, and Frogs in the Pros (NFL and NBA, and soon PGA!). We’ve written about all of the Big 12 teams as well as several national stories with sports like football and baseball. We’ve traveled down memory lane (or as Frogs fans know, our own “Mem’ries Sweet). We’ve told you our stories and the stories of some diehard TCU fans. We’ve written some humorous pieces just to make you laugh, or perhaps ponder if maybe some rules do need to be changed.

We hope you’ve enjoyed the ride so far. We’ve only just begun. We look forward to bringing you even more daily content on all things TCU sports!

Here’s a look at the ten articles that got the most people reading them over our first five months:

If you’re going to launch a new website and you want people to read your stuff, having a newsworthy event is helpful. Removing a legendary head coach in the middle of the football season was not what anyone expected, but it certainly got your attention. You will see several of our articles are about the football coaching transition.

At #10 on the list is this one discussing some of the new staff that Sonny Dykes would be bringing to the TCU football program:

Sonny Dykes is Bringing a Top-Notch Staff to TCU Football: First in a Series

Each week, our panel of fans ranked the Big 12 in our Power Rankings articles. Our rankings for Week 12 of football season made the list. This was the last rankings article before the last week of the regular season. It was Thanksgiving week, so perhaps you were bored with the family and escaped to the KillerFrogs site. We are glad to help! At #9 on the list is:

The Horned Frogs didn’t go bowling last season, but seven of the Big 12 teams did. Two of those made one of the NY6 Bowls, including #9 OSU facing #5 Notre Dame in the Fiesta Bowl. At #8 on the list is:

The end of every football season always brings coaching changes. But, wow, this year, that carousel ride was a wild one– Florida, LSU, Notre Dame, Oklahoma, USC, and Oregon were just some of the big-name schools involved in a coaching change. Coming in at #7 on the list is:

It was an all-SEC national championship game and a repeat of the SEC Championship Game just a few weeks before. But you all wanted to read about Bama and the Dawgs. At #6 on the list is:

Once TCU parted ways with Patterson on Halloween, speculation began as to who the new coach for the Frogs would be. At #4 on the list is this one which was an early look at the prospective coaches:

Each week during football season, KillerFrogs puts out a snarky letter to that week’s opponent. The one to the Baylor fans was especially fun to write. And oh boy, did it get them triggered! Based on the comments on all the KillerFrogs social media channels, it’s no surprise to see this one towards the top of the list:

As the football season came to an end, it was getting clearer and clearer that the new head coach for the Horned Frogs would be Sonny Dykes. At #2 on the list was this article projecting that Dykes would soon be announced:

TCU Football: Are Sonny-er Days Ahead?

1 – It’s the Hap-Happiest Season of All

College Bowl Season is an event like no other. And this year was crazy. We had 41 games initially, added one more to accommodate all teams, then canceled a few because of the pandemic. But you all were eager for the season. As soon as all of the games were announced, we published this article highlighting all 42 of those games. Drum roll, please. The coveted #1 spot goes to:

So, there you have it. KillerFrogs Fan Nation’s Top 10 articles so far. Thanks for coming along on the ride as we got to #500. We’ve only just begun. Here’s to the next 500!

Want to join the discussion? Click here to become a member of the Killer Frogs message board community today!

Fri Feb 11 , 2022
Scientist Mary Beth Browning Monroe is developing materials for healing the human body that could make a tremendous difference in life or death situations. These biomaterials—easy to use and highly effective—could control bleeding within wounds, especially critical in instances where time is of the essence such as on the battlefield, […] 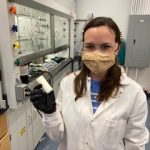