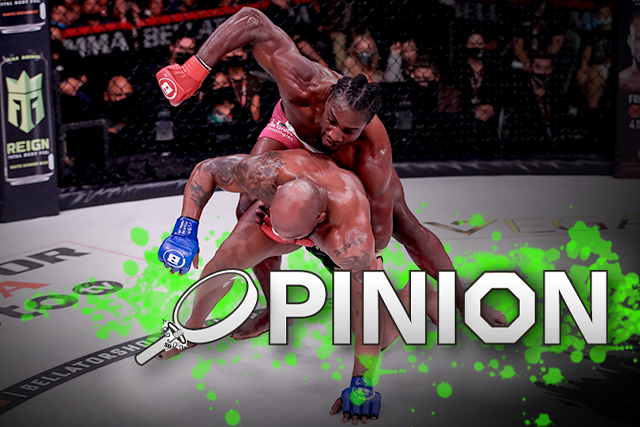 Editor’s note: The views and opinions expressed below are those
of the author and do not necessarily reflect the views of
Sherdog.com, its affiliates and sponsors or its parent company,
Evolve Media.

This past Saturday was a rare treat for MMA fans, as both the
Ultimate Fighting Championship and Bellator MMA were running shows that day. Neither one
excited me on paper, but both ended up being very fun viewing,
surpassing my expectations. What I found especially curious is that
across the two promotions, we saw the same story play out over and
over. Namely, that a smart and professional approach, if not the
most crowd-pleasing, was consistently rewarded with victory.
Meanwhile, an attempt to be extra exciting, to play to the crowd,
habitually backfired, including turning triumph into defeat.

Let’s begin with Bellator 266’s main event. Many will dismiss
Phil
Davis’ victory by claiming Yoel Romero
was old and past his prime. Yet in Romero’s last fight against
Israel
Adesanya just a year and a half ago, the majority of MMA fans
and a good portion of MMA media, myself
included, felt the Cuban dynamo deserved the nod. Clearly, he is
still a tremendously dangerous, powerful, and fast striker, and
watching the Bellator main event, his cardio was noticeably better
at light heavyweight, despite being older.

And yet, Davis largely neutralized Romero, defeating him more
decisively than anyone since Rafael
Cavalcante 10 years ago in Strikeforce, one crazy scorecard from Jerin Valel
notwithstanding. He did so with a calm, brilliant gameplan. Early
on, Davis was very cautious with his jab, not trying to inflict
damage or set up combinations so much as draw Romero out. Then,
when Romero would inevitably explode, Davis used his impressive
movement to evade and try to score off counters, especially the
one-two, keeping Romero at the end of his punches and himself out
of range. Romero, however, was perfectly willing to wait and also
scored with a number of powerful leg kicks. In fact, I even gave
him the first round. However, this was not the full extent of
Davis’ plan. When Romero started finding a rhythm with his striking
and started opening up more, it wasn’t long until Davis used his
grappling to repeatedly take him down as he came forward, catching
the Cuban Olympic wrestling silver medalist completely by surprise,
and proving that yes, wrestling ability declines with age, as does
every other skill. Davis’ intelligent strategy garnered him a fine
win and proved that he is still a Top 10 fighter at 205 pounds.

Was the bout a riveting “Fight of the Year” candidate? Of course
not. But Davis won decisively, whereas going toe-to-toe with Romero
may well have ended with him knocked out cold on the canvas.

Davis wasn’t the only fighter using a smart strategy to vanquish an
opponent that night. Also at Bellator, Saul Rogers
mostly dominated longtime contender Georgi
Karakhanyan with superior wrestling and an excellent top game.
The fight wasn’t without its bumps, as Karakhanyan badly hurt
Rogers in Round 2 with a flying knee and almost finished him, but
the crafty, tough Rogers overcame adversity and took him right back
down to the ground. In the process, he gained a necessary victory
after his loss to Mads
Burnell at featherweight earlier this year, potentially
establishing himself as a serious contender in Bellator’s
lightweight division.

Nor was such intelligence and practicality confined to Bellator.
Ion
Cutelaba isn’t the first fighter that comes to mind for such
descriptors: He starts scuffles with opponents during weigh-ins,
goes to their corner before a match to slash his throat with a
finger menacingly, and then fights like a wild berserker, trying to
smash his foe into smithereens. Yet in the co-main event of
UFC Fight Night 192 he fought very
intelligently against Devin Clark.
He was downright cautious for the first half of round 1, throwing
few strikes and waiting for the right opening, in stark contrast to
previous bouts. And when he did seize the opportunity, badly
hurting Clark, he didn’t waste all his energy going for the finish,
as had been his undoing against Jared
Cannonier and Glover
Teixeira, where he gassed in Round 2 and ended up losing.
Cutelaba’s new, smart approach might have cost him a finish and
possible fight bonus, but it also guaranteed a lopsided win against
a tough opponent, one which he desperately needed after two
knockout losses and a draw in his last three outings.

Notice, meanwhile, what happened to fighters at “UFC Vegas 37” who
were going for the finish and performance bonus. Antonio
Arroyo, despite being a considerable underdog to Joaquin
Buckley, found himself up two rounds as he entered the final
period. He did so by being patient, punishing Buckley with kicks at
range, and either evading with his fine movement when Buckley tried
to close the distance or else catching his shorter opponent with
knees. Buckley had been unable to land a single big punch for the
first 10 minutes. And yet, rather than continue fighting
intelligently in the final stanza, knowing that it was Buckley who
needed a finish, Arroyo elected to go toe-to-toe with him in risky
exchanges. This made even less sense considering that Buckley is a
powerful puncher and that Arroyo was 0-2 in the UFC, desperately
needing a win. And yet, perhaps spurred on by Dana White’s love of
“killers” and the potential for $50,000, Arroyo tried to be extra
exciting. While he had success with this for a while, hurting
Buckley badly with a knee, it ultimately spelled doom, as he was
knocked out in highlight reel fashion. For the record, I think
Buckley’s right hook that began the finishing sequence was illegal,
wrapping around and striking the back of the head, but at present,
it’s still a KO loss and likely means the end of Arroyo’s tenure in
the organization.

Equally tragic was the fate that befell Tony
Gravely against Nathan
Maness. At the end of Round 1, he temporarily separated Maness
from consciousness with a picture-perfect overhand right. Instead
of continuing his successful strategy from the first round, mixing
powerful close-range strikes, whether hooks or body kicks, with his
wrestling, to keep Maness constantly off-balance and taking away
his ability to counter, he fell in love with his standup too much,
throwing power punches in the pocket for extended periods of time
to try and get the knockout. One such exchange proved fatal, as
both men simultaneously landed right hands, but Maness’ was much
harder, dropping Gravely and leading to a knockout for the wrong
man. To add insult to injury for both Arroyo and Gravely, it was
their opponents, Buckley and Maness, who ended up receiving a bonus
check for their efforts.

And again, this wasn’t confined to one promotion. In Bellator,
Alejandra
Lara was an avatar of confidence for her fight against DeAnna
Bennett, literally singing and dancing her way to the cage,
including spins and splits. It was certainly tempting fate, as the
fight gods have repeatedly shown they hate such pageantry, as the
sad demise of Apollo Creed proves. Early on, Lara looked great,
battering Bennett with an array of strikes. But she became far too
aggressive and wild in getting a fancy finish, with an ill-advised
kick causing her to be taken down by Bennett, who proceeded to
thoroughly batter her for the rest of the round. This took a lot of
steam out of Lara and might have injured her, as she couldn’t
recover in Rounds 2 and 3, which were competitive but won by
Bennett. Had Lara not been so eager to be exciting and instead
taken her time while limiting Bennett’s ability to take her down,
she would very likely have won, even if it would have been by
decision.

Both Bellator and the UFC this past weekend leave us with a very
clear lesson. In modern high-level MMA, where every opponent is
skilled and dangerous, going for a thrilling, exciting finish is a
frequent path to ruin. Instead, a fighter who wants to win should
prioritize being smart and professional over being entertaining.

Delhi Eatery Denies Entry To Woman Wearing Saree As It's Not 'Smart Wear'; Netizens Are Furious

Wed Sep 22 , 2021
A restaurant in Delhi allegedly denied entry to a woman who was wearing a saree. An undated and unverified video of a woman asking the staff at a hotel if saree is allowed has gone viral on Twitter. “We only allow smart casuals” “Show me that saree is not allowed,” […] 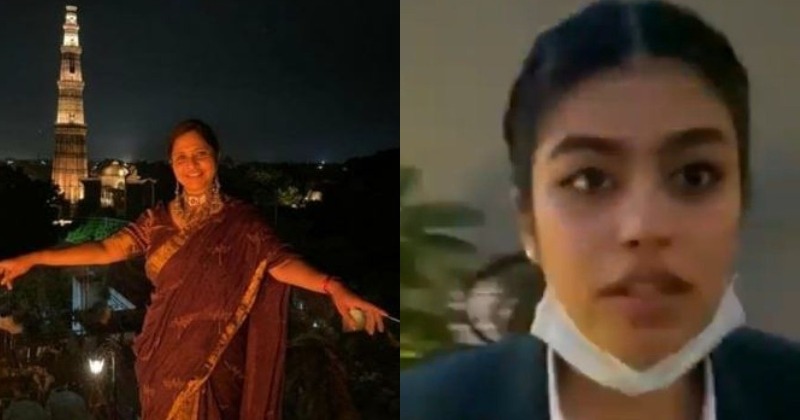