An Oakland-based computer scientist and standup comedian is Monday’s returning champion on Jeopardy!, and she’s hoping to champion trans awareness while also making a bit more money to pad her already considerable total.

Amy Schneider is not the first openly trans contestant to appear on Jeopardy! in the post-Alex Trebek era, but she is one of a small contingent who have been quietly coming on the show over the last year. The group includes Kate Freeman, who was the show’s first out trans champion last December.

Schneider tells Newsweek that she had been trying to get on the show for over a decade, and that transitioning may have helped in that regard.

“The reality is that for the first few years of that, when I was trying out, I was, as far as any of us knew, a standard white guy,” Schneider, who came out as trans in 2017, says. “And there’s just more competition for those slots on Jeopardy! They’re making a TV show, they don’t want everybody to look the same, and I looked a lot like many of the other contestants, and I think that definitely made it a little tougher for me at that time. I would have got on eventually — I was never gonna stop trying!”

Schneider has also been using Twitter to narrate some of her behind-the-scenes experience of being on the show. She flew to Los Angeles and, she explains, all three of those winning appearances were shot during the same one day of shooting — the production shoots ten episodes across two days, and Schneider says that’s always Monday and Tuesday. So her Wednesday, Thursday, and Friday night winning games were all shot on the same Tuesday sometime in recent months.

“So, what does one do after winning $100K in the course of an afternoon? I got my things, and walked to the parking garage, feeling great. ‘I guess I’m pretty smart!’ I thought,” Schneider writes. “Then I spend 20 minutes wandering around the parking garage looking for my car [face-palm emoji].”

Then I left, pulled into the first parking lot I found, and called my girlfriend, and then my mother, with the news. (The rule was, I could only say what happened to people who would have been in the studio audience if they could.) You can probably imagine how those calls went 🙂

I’ll tell you what, trying to plan a software project the day after one of the most thrilling experiences of my life, which was also a long day followed by not much sleep, all while keeping a poker face and, oh yeah, booking my next trip down to LA, was… interesting.

Schneider’s wins, as USA Today noted, happened to fall during Trans Awareness Week, which she also acknowledged on Twitter — thanking Freeman and others for “blazing the trail” on the game show.

“I know that in my life, [it’s great] to see trans women out there, not being the sort of freaks or prostitutes, or other things that until only a few years ago was all you ever saw them as,” Schneider said, speaking to Newsweek. “So as that changed, as I’ve been able to see them in other contexts—as the human beings that they are—that’s been really important for me. And so I’m just really glad to be able to do that same thing for other people.”

She noted that Laverne Cox’s presence on television has been an inspiration, as has a comedian friend of hers in the Bay Area, Natasha Muse.

Newsweek asked Schneider whether she thought a background in computer science was helpful for winning on Jeopardy! — both host and previous champion Ken Jennings and recent impressive champion Matt Amodio have similar backgrounds.

“I’ve always said about what I do is translate,” Schneider tells Newsweek. “I translate between computer and human. I think to be good at that you have to have a sort of mindset that’s curious and interested in looking at things from a lot of different angles and all that sort of thing, which I think is likely to make you somebody that’s kind of got a wide range of interests.”

Follow Amy Schneider on Twitter for more narration about her experience at the show during some pre-game tweets this evening.

Below, the Final Jeopardy question that Schneider won with on Friday’s episode.

How an MBA helped 10 start-up founders launch their businesses

Sat Nov 27 , 2021
BY Meghan MalasNovember 18, 2021, 2:04 PM Graduates at Quincy College enter during the Quincy College graduation at Veterans Memorial Stadium, as seen in May 2021. (Photo by Suzanne Kreiter—The Boston Globe/Getty Images) Starting a business can be an overwhelming ordeal. No matter the industry, a founder is bound to […] 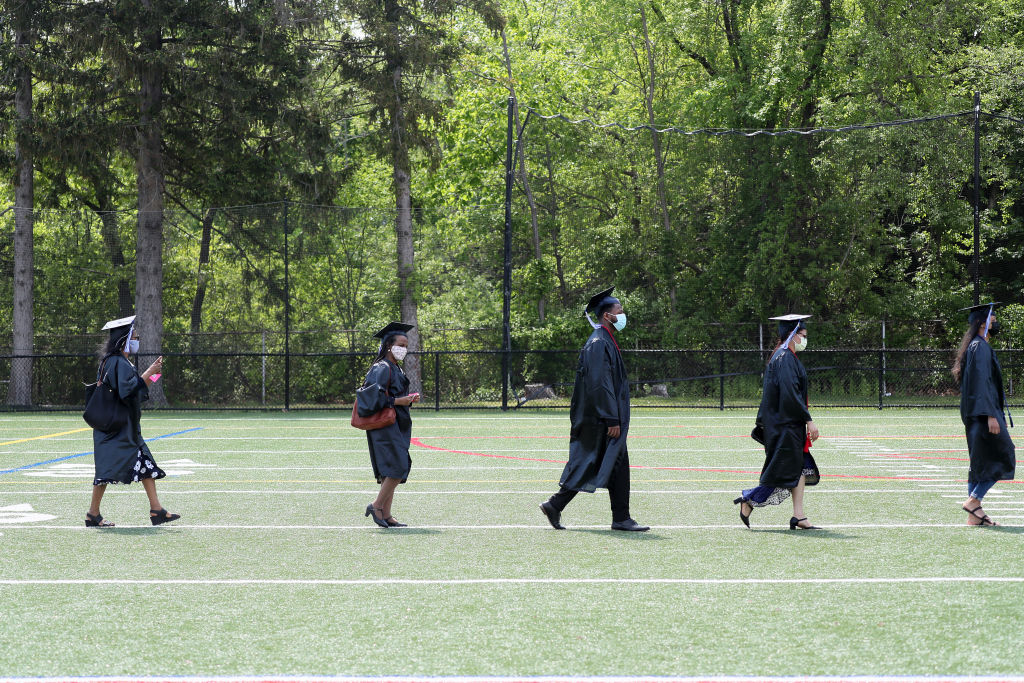