A Danish shipping giant is betting that your online purchases of appliances, furniture and sweatpants will be the next phase of its growth.

Maersk, which moves nearly a fifth of the world’s ocean freight, recently purchased Visible, a logistics company with nine US e-commerce fulfillment centers that warehouse and pack orders for retailers. With the acquisition, Maersk says, it can fill orders and get them to the doorsteps of 95% of all US households within two days.

Get the CNET Now newsletter

Spice up your small talk with the latest tech news, products and reviews. Delivered on weekdays.

The company’s strategy: Combine its fleet of 700 container ships with warehousing expertise to stitch together a supply chain offering port-to-door service. Doing so, Maersk says, will lower costs for both retailers and customers by minimizing package handoffs to outside contractors, a common practice in the industry. It’s part of a bid to capture more of the money you’re spending online.

The plan is to attract customers who sell from their own platforms and need help fulfilling orders, said Brian Bowers, Visible’s chief operating officer. Amazon’s multichannel fulfillment service also targets these sellers, and though the company didn’t provide data on how many third-party sellers use it, it’s not the largest part of its fulfillment business. Visible offers customized packaging, allowing retailers to maintain control of their branding through the delivery process. The setup also means fewer giant packages stuffed with plastic air bubbles. It’s a move away from selling things through popular online marketplaces run by Amazon, Target or Walmart.

“We find clients who want to do something different,” Bowers said.

It’s no secret what’s driving Maersk’s push into fulfilling online orders. E-commerce boomed during the pandemic as consumers filled virtual shopping carts rather than tote bags at the mall. Online sales swelled by 44% in the first three months of 2020. Growth has moderated to 9%, but e-commerce is still growing faster than the rest of retail.

The investment comes as the global supply chain chokes due to historically heightened demand, COVID-related port shutdowns and storm-created chaos. Scores of cargo ships have backed up at ports, including Los Angeles and Long Beach, waiting to unload. Tennis balls, couches and even pickles have been affected. As a result, any product you order online — think about your holiday shopping — could take longer than usual for delivery.

Supply chain problems likely to last after the holidays

E-commerce companies are reinvesting their pandemic bonanzas. Walmart is pouring billions to expand local fulfillment centers and purchase robots to fill orders faster. Target, whose e-commerce business grew faster than its competitors’, is plowing $4 billion of those sales back into a strategy that includes building out its e-commerce capacity. Even fast-fashion retailer American Eagle Outfitters is getting into the e-commerce fulfillment business with its purchase of Quiet Logistics, announced Tuesday.

Amazon, which generated about 40% of US e-commerce sales in 2020, has doubled its warehouse space since the start of the pandemic. It currently has more than 350 fulfillment centers, air hubs and other facilities to move goods around.

Packing up orders and getting them out the door has become a highly competitive part of e-commerce, accounting for $78 billion in sales globally in 2020. It’s all about gaining more control of the supply chain to make sure things go smoothly, because consumers expect their packages to arrive either fast or free. Combining Maersk’s shipping and port services with fulfillment can help retailers meet those consumer expectations, said Narin Phol, regional managing director for Maersk’s North American operations.

“We have all the elements of the supply chain,” Phol said.

Carlos Rodriguez, a lawyer who negotiates deals for e-commerce and transportation companies for firm Husch Blackwell, noted that Maersk is offering an alternative to online marketplaces. Selling through a major retailer’s platform gives merchants access to robust fulfillment services, but can come at the cost of branding when products arrive in Amazon’s smile boxes or with Target or Walmart logos.

“It’s going to create a new competitive environment,” Rodriguez said of the acquisition.

Tightening up the supply chain makes shopping better for customers, said Jordan Speer, a retail industry analyst at IDC. Speedy delivery is such a selling point for e-commerce that, in some ways, she says, “the product is the supply chain.”

Amazon changed consumer expectations when it introduced its Prime two-day delivery service in 2005. With Prime now available around the world, 200 million people have grown accustomed to its quick service for goods sold on Amazon’s sprawling websites, which include nearly 2 million independent vendors.

Nearly half of Amazon’s US third-party vendors let the company fulfill their orders. In 2020, that translated to the shipment of nearly 2.8 billion packages in the US, according to e-commerce tracking company ShipMatrix. The service relies on the company’s hundreds of US facilities and uses a highly systematized, labor-intensive process in which people and robots fill boxes. Amazon also has its own fleet of semi-trailer trucks and air freight carriers, and has deputized more than 1,300 small delivery companies to distribute packages in communities throughout the US and Europe.

Amazon is also expanding its access to port terminals by 50%, increasing the speed with which it can unload goods for both itself and its third-party sellers, and doubled its capacity to load and unload shipping containers at its warehouses as it tries to address global shipping delays for the holidays.

From shipping containers to delivery trucks

Maersk and Visible have something the e-commerce giant doesn’t: Hundreds of container ships around the world. Maersk owns or charters more than 700 ships and has a subsidiary, APM Terminals, that operates 76 port terminals. Maersk has a big source of potential customers for Visible’s fulfillment services because those containers hold millions of tons of consumer goods, many of which will need to be shipped directly to a customer once they make land.

Additionally, Visible works with the retailers to customize package sizes and get brand logos on the boxes they ship. That can lower shipping costs for retailers, Bowers said. It can keep the company that made the product front of mind when you open the package, instead of making the Amazon, Target or Walmart logo the first thing you see when you receive it. That addresses the loss of awareness that prompts people to say something like “I got it at Amazon” about things they actually bought from another merchant.

“We have a lot of clients who say, ‘I actually don’t want Amazon to own my brand,'” Bowers said.

Sat Nov 6 , 2021
Shares of Kaisa Group, a Shenzhen-based developer, were suspended from trading on Friday in Hong Kong. The company’s subsidiaries, which were also halted from trading, cited a “pending” announcement about the group in stock exchange filings. While Kaisa did not disclose more details for the reason behind the suspension, it […] 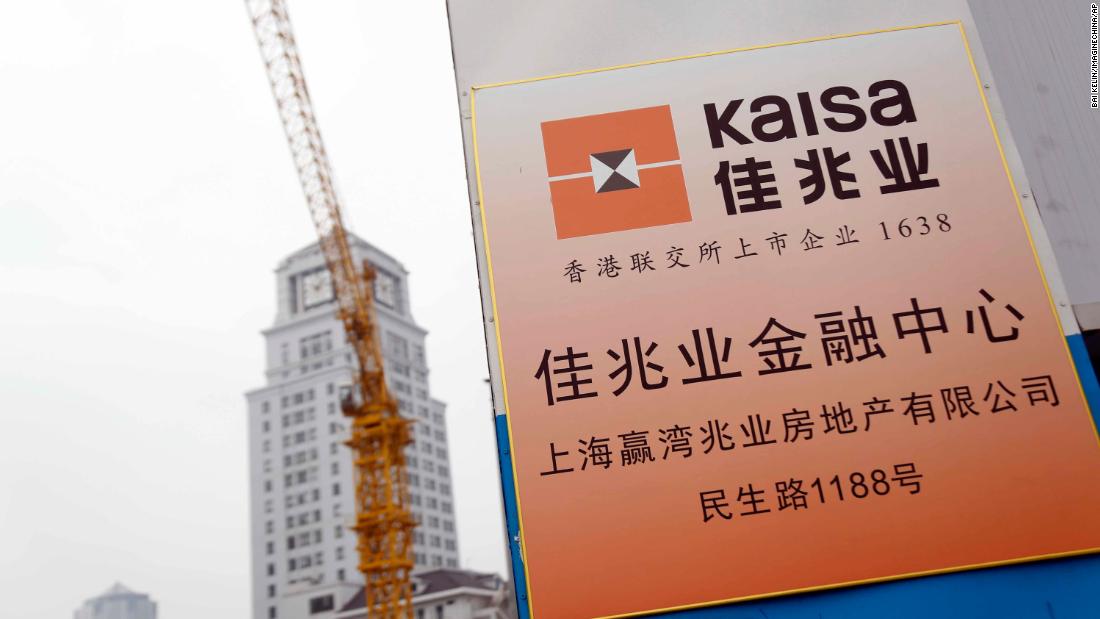